In a final round of the US Open marred by controversy over whether Dustin Johnson made contact with his ball on the fifth hole, one daily fantasy golf player turned in an unquestioned perfect game. ‘mmcconn‘ took down the US Open DraftKings Millionaire Maker with 468.50 points. His reward: $1 million. The number of lineups he beat: over 170,000.

If you’re not familiar with fantasy golf on DraftKings, you roster six players within a $50,000 salary cap. Crazily enough, ‘mmcconn’ selected the top six finishers in the US Open for a perfect game. There was a three-way tie for second in the US Open and a two-way tie for fifth.

We’ll start at the top with Dustin Johnson, who was assessed a one-stroke penalty on the fifth hole of his final round on Sunday, but still won by three strokes with a four-day total of 276. He scored 90 points on DraftKings thanks to 55 pars, 11 birdies, five bogies, and the win. Johnson now has three top-five finishes in a row and three straight tournaments with at least 90 points on DraftKings. He was 25.7% owned despite his struggles to win a major up to this point.

There was a three-way tie for second among Jim Furyk, Shane Lowry, and Scott Piercy, each of whom had a four-round total of 276 strokes. They each scored different point totals on DraftKings, however, thanks to different mixtures of pars, birdies, bogies, and bonuses.

The final duffer tied for second in the US Open was Piercy, who was 2.0% owned and had 81.5 points on DraftKings, the second highest point total in the winning lineup. Piercy had 46 pars, 14 birdies, and 11 bogies and got a bonus for three birdies in a row.

‘mmcconn’ also selected the two golfers who were tied for fifth place at the end of the final round on Sunday at Oakmont: Sergio Garcia and Brandon Grace. Their stats were identical, as each recorded 44 bars, 14 bogies, and 14 birdies. Both were about 13% owned to boot and finished with a real-life total of 280 strokes.

Here was the winning lineup: 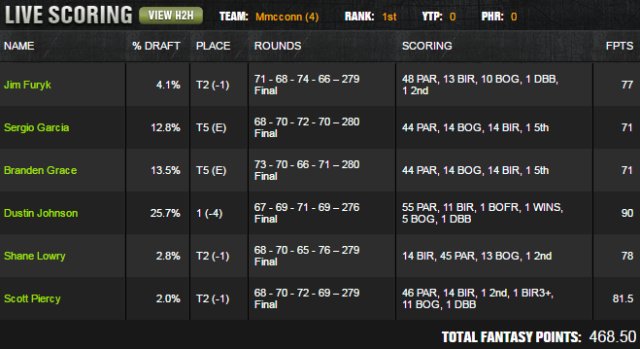 ‘mmcconn’ won by almost 20 points over ‘DrewDown24‘, who came out on the short end of an $800,000 sweat between the $1 million first place prize and the $200,000 consolation prize. ‘DrewDown24’ had Johnson and Piercy, but his next highest finishing golfers were Jason Day and Daniel Summerhays, who tied for eighth in the US Open.

Here were the top eight finishers: 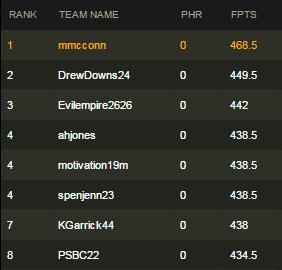