From the middle of the pack of one of the toughest $10K GGPoker Super MILLION$ final tables in recent weeks, it was satellite winner ‘Ferrariman’ who, in just their second appearance in the tournament, bested some of online poker’s top talent and took home this week’s $452,885 first-place prize.

It goes without saying that every final table of the weekly Super MILLION$ is tough. However this week, the tournament talent on hand was undeniable. Earning a seat to Tuesday’s final table were two former worldwide #1-ranked online pros in Niklas Astedt and Yuri Dzivielevski, two of the greatest high rollers of all time in Sam Greenwood and Mikita Badziakouski, the red-hot high-stakes pro David Yan, and nosebleed cash game crusher Wiktor ‘limitless’ Malinowski.

But despite all the accolades at the table, in the end, it was ’Ferrariman’ who outlasted them all. But when it came to who the public thought was going to win it all, there wasn’t a lot of confidence in ‘Ferrariman.’ Getting 11.4-1 odds to win in the GGPoker client, only 13 people placed a bet on ’Ferrariman’ to take it down. Those 13 people wagered a total of just $41 dollars out of a grand total of $54,226 wagered.

Plenty of the money wagered was on Niklas Asdedt who entered the final table third in chips. He needed a fourth-place finish or better to become the first player to surpass $2 million in total Super MILLION$ earnings. But after losing a pair of big hands the Swede found himself short-stacked and all-in preflop holding

. The board ran out

allowing Badziakouski’s kicker to play and sending the All-Time Online Money List leader out in ninth place for $56,610.

Chicago’s Timothy Nuter, playing out of Canada, put in a raise from the cutoff with

and was quickly three-bet on the button by Dzivielevski holding

. It folded back to Nuter, he moved all-in, and was quickly called by the Brazilian. There was little drama as the board ran out

awarding the hand to Dzivielevski and eliminating Nuter in eighth place for $73,415.

. It folded to ’Syntropy’ in the small blind who pushed their final eight big blinds in the middle with the

. It folded back to Dzivielevski who made the call. The flop came

giving both players ’Syntropy’ gutshot straight draws. The turn was the

, giving Dzivielevski the nut straight and leaving ‘Syntropy’ drawing dead to the

river. ’Syntropy’ entered the final table ninth in chips, laddered two spots and ended up with a $95,207 score for seventh place, their largest career win on GGPoker.

During an hour of six-handed play, Sam Greenwood was grinding a short stack. On the button, he stuck his final five big blinds in the middle with the

. In the big blind, Dzivielevski made the call with the

, giving the Brazilian two pair and reducing Greenwood’s outs to a gutshot straight draw. The turn was the

and the river was the

giving Dzivielevski another elimination and sending Greenwood out of the tournament in sixth place for $123,468.

Four hands later, when folded to in the small blind, Malinowski shoved his

on Badziakouski in the big blind who held

. With just over ten big blinds left, Badziakouski made the call with his tournament on the line. The board ran out

During four-handed play, Malinowski built up a considerable chip lead, mostly at the expense of Dzivielevski. When folded to in the small blind, Malinowski moved all-in with the

. In the big blind, with just four blinds left, Dzivielevski called off with his

was of little help to Dzivielevski. The turn was the

leaving the former #1 looking for a non-spade ten or a king. The river was the

giving Malinowski the straight and ending Dzivielevski’s nice run in fourth place which was good for $207,649.

The chips really shifted during three-handed play with Malinowski, David Yan, and ‘Ferrariman’ taking turns picking up pots and building a stack. From the button, Yan raised big with the

. With the majority of his stack in the middle, Yan made the call. The flop came

turn gave Yan some additional straight outs but the

was not one of them. Yan, who played his fifth final table, added another $269,287 to his Super MILLION$ earnings bringing his total to over $1.295 million.

Malinowski started heads-up play with a two-to-one chip advantage. But ‘Ferrariman’, who had played tempered the whole final table, went on a run. He doubled through Malinowski to take the chip lead and from there, kept up the aggression. Even after they lost a big hand that would have ended the tournament, ‘Ferrariman’ applied pressure and picked up the key pots to put them in a position to win.

. In the big blind ‘Ferrariman’ raised holding the

. Malinowski then shoved, ‘Ferrariman’ was quick to call and the board ran out

, leaving ‘limitless’ drawing dead on the turn and sending him out as the runner-up for $349,222. 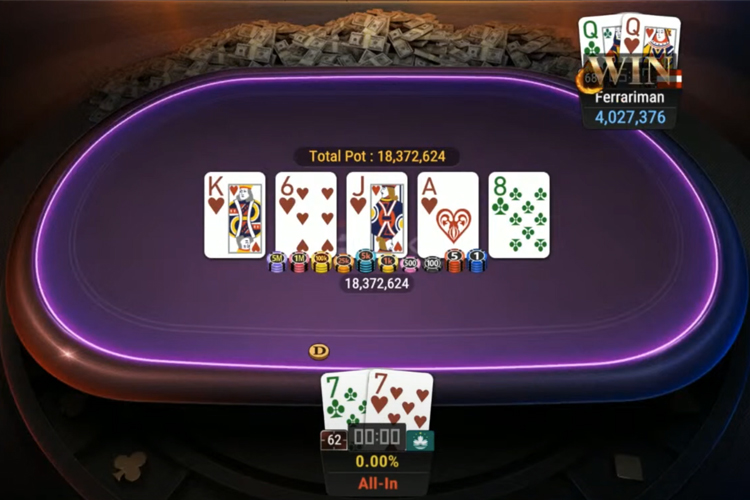