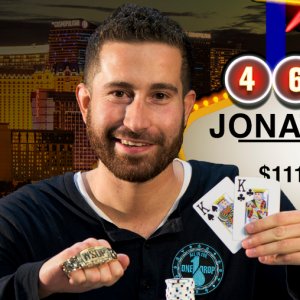 2010 World Series of Poker Main Event champion Jonathan Duhamel (pictured) has hit it big once again, this time taking down the $111,111 High Roller for One Drop for nearly $4 million. The 27-year-old scored his second gold bracelet in his sixth career WSOP final table.

Duhamel told WSOP officials when the tournament ended, “I feel so lucky and so blessed in so many ways where I am right now. This is the biggest buy-in event of the summer and it turned out to be my second-best day.” 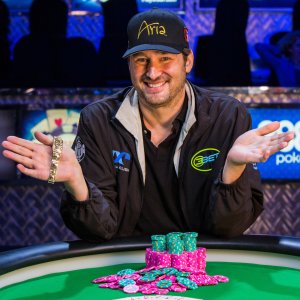 The One Drop event sent a portion of each player’s buy-in to the eponymous charity that’s focused on water issues worldwide. This year’s gathering created the largest prize pool of the 2015 WSOP thus far at $14.2 million and Duhamel’s competition at the final table included the likes of 14-time bracelet winner Phil Hellmuth (pictured) and 2014 Big One for One Drop winner Daniel Colman.

Duhamel doubled up early on at the final table with aces. He said of the key hand, “After that, I could just use my chips and played my game.” Complicating matters was a medical emergency at the Rio that stopped play in all events after a participant had a heart attack. Colman was all-in against Bill Klein when the stoppage occurred.

In the end, Duhamel outlasted Klein for the win and the almost $4 million first place prize. He commented, “This tournament and this cause mean a lot to me. So, to win this tournament is such an honor. I know Guy [Laliberte]well and he’s the one who started this. I’ve also been a spokesman for One Drop. This tournament and the money raised will help lots of people. So for me, this is like a double win.”

The final table was packed with bracelet winners and self-made millionaires. Colman is up to $17 million in WSOP winnings after bagging $1.5 million in this tournament. Ben Sulsky has recorded three straight fourth place finishes in WSOP events and is a nosebleed-stakes cash game player. Anthony Zinno is the reigning World Poker Tour Player of the Year:

All 137 entrants in this tournament were male and the field included two first-time WSOP entrants. There were 98 Americans and 39 players from other countries, with England constituting the second largest group with 21 players. The ages of participants ranged from 21 to 74; John Morgan was the eldest statesman.

Stay tuned to PocketFives for the latest WSOP coverage, brought to you by Tournament Poker Edge.