With every end comes a new beginning. As PokerStarsannounced that it had parted ways with several of its sponsored pros in recent weeks — including Greg Raymer, Darus “BejoMas” Suharto and Julian Thew — the site added 15 pros to its Team Online earlier this month.

Among the new team members was renowned online tournament grinder Shane shaniacSchleger, a member of the PocketFives forum since May 2005 and a feared player for as long as this writer can remember. Schleger has accumulated more than $2.2 million in online tournament earnings in his career with another $1 million-plus in live cashes to his credit. On top of his poker accomplishments, Schleger maintains a popular blog, shaniaconline.blogspot.com, that explores his life as a professional poker player.

Schleger bested more than 4,500 applicants for the highly-coveted Team Online position. PokerStars only offered the job to its SuperNova players and, following a thorough selection process, added the long-time Hold ’em specialist to its prestigious roster.

“Like most things in poker, I feel it was a combination of luck and hard work, but really a lot of luck,” Schleger told PocketFives. “I felt I had a reasonable shot when I submitted the application because I have been playing on Stars as a happy customer, with a sort of Stars-centric identity too, so I thought it would be an amazing opportunity.”

On joining the world’s leading online poker room, Schleger, said: “It’s a product I am truly proud to represent, or feel no qualms at all representing, which probably wouldn’t be the case for all products in this world. So in that way I feel lucky … that it’s just somehow a natural fit.”

With countless players boasting impressive results nowadays, a deal with a major site is seemingly impossible for most online grinders — especially those residing in the U.S. PokerStars, for example, has only inked a handful of American players over the past few years. That reality makes the deal even more rewarding for the California native.

“Ancillary income is something that really can be make-or-break for a tournament pro,” said Schleger. “I definitely didn’t appreciate that early in my career, but I’ve been aware of it for a while now.”

The news of his sponsorship opportunity came just days after the biggest online win of Schleger’s career. On Feb. 6, he took down the colossal Sunday $100 rebuy on PokerStars for $76,091. The field was loaded with the game’s top tournament pros, including Stephen stevie444 Chidwick (pictured), who finished runner-up to Schleger for $55,301.

The victory didn’t come without a bit of fate, though. Schleger admitted to PocketFives that he nearly executed a classic blowup on the final table bubble after bluffing off a good portion of his stack.

“On the exact final table bubble I went from comfortable chip leader to middle of the pack,” he explained. “Meanwhile, I had a house guest over, and he sort of overstayed his welcome. Not really his fault, but I prefer to be alone on Sundays. Without realizing it, I was on full blown tilt. I made a horrible re-shove in the big blind with A4o and sucked out on ATo, or else there’d be no story here!”

As if his month couldn’t get any better, Schleger won the PokerStars $100 rebuy again on Feb. 16 for $32,067. Not a bad start for the newest PokerStars Team Online Pro. 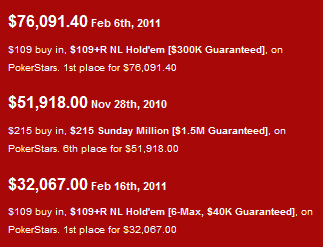