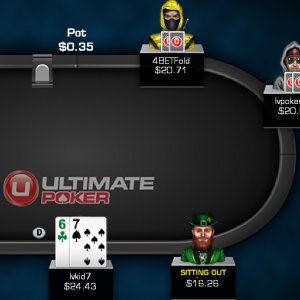 On Friday, following word that its land-based partner casino, Trump Taj Mahal, is facing bankruptcy, Ultimate Gaming announced that it plans to withdraw from the regulated New Jersey marketplace. In doing so, Ultimate terminated its agreement with Trump due to “multiple breaches by Trump Taj Mahal Associates,” according to a press release.

PocketFives’ news coverage is brought to you by Betsson Poker, a leading global online gaming provider. Betsson Poker is available on Mobile and offers regular promotions to live events around the world along with great bonuses and competitions. Play nowfor a chance to win the a Dream Holiday with the Grand Poker Adventures throughout 2014!

No hard end date for Ultimate’s operations in New Jersey was given; however, the company plans to continue its Nevada online poker room, which was the first regulated site in the US and came online in mid-2013.

A notice posted on Ultimate Poker’s website stated that the room will be leaving the Garden State “in the near future” and is longer be taking new customers. It added, “Please go to your account and withdraw any balances you may have by following the normal withdrawal procedures.”

In PocketFives’ New Jersey poker community, players were discussing the loss of Ultimate, with one person lamenting, “Sigh was my favorite site in the first few months of NJ poker. Massive overlays. GG. Sigh.”

Longtime PocketFiver Jack Jaybone2315 King revealed to our New Jersey community that he works for Ultimate Gaming in New Jersey and described the recent HR moves: “Most people were laid off today, but I’ll be around for the next few weeks to help with the shutdown. Sigh.”

The loss of Ultimate comes alongside a tidal wave of less-than-stellar news for the New Jersey gaming market. What started as a group of 12 casinos has been slashed to eight this year, while Trump Taj Mahal’s closing will leave the seaside city with seven when it shuts down, reportedly in mid-November. Betfair, which lost Trump Plaza, its land-based partner, may soon leave the market as well, but continues to operate.