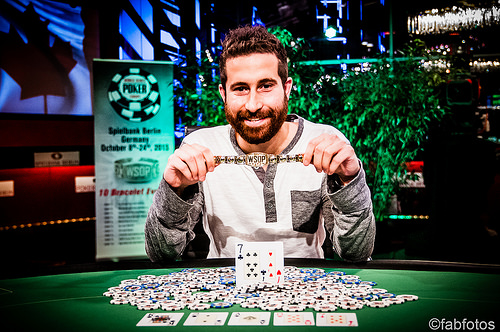 Friday evening in Berlin, Jonathan Duhamel put himself into elite territory when he beat David Kitai heads-up to win the €25,600 High Roller event at WSOP Europe to win €554,395 ($609,934 US) and his third WSOP bracelet.

With the win Duhamel, who won the WSOP Main Event in 2010, became the first Main Event champion of the November Nine era to win a third bracelet. Duhamel’s second bracelet came in July when he won the High Roller for One Drop.

“It feels even better than the second one,” Duhamel said. “I felt like this tournament was really tough. It’s one of the toughest I’ve played in my life. To be able to win it, it means everything.”

The six-handed final table, which will be broadcast on ESPN later this year, took just over 6 1/2 hours to complete. When play began Italian poker pro Mustapha Kanit had an overwhelming chip lead but it was Duhamel who made the first move.

Just after two hours into the day Duhamel eliminated Fedor Holz in sixth place. Holz, shortstacked for most of the day, raised to 170,000 and Duhamel moved all-in. Holz called and table Ts 9h while Duhamel was ahead with Ad 7s. The flop came Jh 7d 2d adding a gutshot straight draw to Holz’s possibilities. The turne was the 7c leaving only the straight draw for Holz. The 5h missed and the young German out in sixth place.

Kanit then put his big stack to work. He eliminated the only other German player at the final table, Christoph Vogelsong, in fifth and then Sam Chartier in fourth. With just three players remaining, Kanit had a slight chip lead over Kitai and Duhamel and it all went downhill from there for the Belgian pro.

Kanit lost over half of his stack to Kitai on a board showing 9h 7h 3d Qd Jc when he couldn’t best Kitai’s 9d 8s. And then Duhamel finished the job when he called Kanit’s preflop shove. Kanit, with Qh 5s, had live cards against Duhamel’s Ac Jd. The flop, turn and river all missed Kanit, leaving Duhamel and Kitai to play heads-up.

Duhamel had a slight chip lead over Kitai when heads-up play began and applied pressure throughout the early stages of heads-up play. Down to just over Kitai did double-up at one point but it was nothing more than a momentary blip for Duhamel. On the final hand of the night Kitai moved all-in from the button with Jh 7s and Duhamel called with 7c 7h. The As Ks 2s flop gave Kitai some outs but the 8h turn and 7d river weren’t amongst them to give Duhamel the pot, the bracelet and the fourth biggest score of his career.