Christian Rudolph emerged from the talent-packed final table of the World Poker Tour Online Series Main Event on partypoker to earn his first WPT title and $487,442.75 for the win.

The path to the WPT Champions Club was no easy task for Rudolph as he first had to navigate the Main Event field of 1,065 runners over the course of three days and then take on a number of elite pros at the final table. The final nine included final table chip leader Daniel Dvoress, Rainer Kempe, and the current #1-ranked online player in the world, Yuri Dzivielevski. Additionally, the final table took roughly nine hours to complete, with three-handed play spanning nearly four hours alone.

Stoyan Obreshkov started the day seventh in chips, but after losing a critical pot in the early orbits of the final table the Bulgarian found himself on fumes. Yuri Dzivielevski put in a raise from under the gun with

and when it folded to Obreshkov in the big blind, he made his final stand with

giving Dzivielevski top pair. And while the

brought some additional outs for Obreshkov the

river ended his day, eliminating him in ninth place for $42,711.

Minutes later Rainer Kempe got cooled off in a big hand against Daniel Dvoress. Kempe from late position with his

. Kempe replied by shipping his roughly 20 big blind stack and Dvoress quickly made the call. The board ran out

With seven left, Mexico’s Sebastian Camilo Toro Henao found himself short-stacked, in the big blind and facing an all-in shove from Brazil’s Fabiano Kovalski in the small blind. Camilo Toro Henao called off his final seven big blinds with

and Kovalski showed down a dominated

In the early part of the day, it looked as Dzivielevski was making a run at punching his ticket to his first WPT win. He was picking up hands, accumulating chips in bunches, and closing in on taking over the chip lead. However, with six left, Dzivielevski had slipped down the chip counts when he clashed with the big stack of Dvoress. From under the gun Dvoress opened with

and when folded to him on the button, Dzivielevski flatted holding

. Marc Lange made the call from big blind holding

and the three saw a flop of

, giving Dvoress top set. The action checked through to Dzivielevski who put in a small bet, after Lange folded, Dvoress check-raised and after a few seconds, Dzivielevski made the call. The turn was the

giving the Brazilian top pair. Dvoress fired again and Dzivielevski made the call, leaving himself with roughly 12 big blinds behind. The river was the

and when Dvoress shoved with his full house, Dzivielevski made the call ending his run in sixth place for $86,399.

Fifteen minutes later, Dvoress was preparing to take out another opponent. From under the gun, Dvoress opened holding

. When it folded back to Luciano Hollanda in the big blind, the Brazilian three-bet shipped his final eight big blinds with his

. Dvoress snap-called and the flop came

bringing a little hope for Hollanda. However, the turn came the

and the river was the

which shipped the pot to Dvoress and eliminated Hollanda in fifth place for $111,783.

Four-handed play lasted nearly ninety minutes when, on the hand before the fourth break of the day, Kovalski put in a raise from the cutoff with

. Lange three-bet the majority of his stack with

, leaving himself fewer than four big blinds. After Kovalski shoved, Lange called off the rest of his chips and the pair watched on as the flop came

, which brought little help to Lange. The turn was the

, leaving Lange looking for an ace on the river. Lange did pick up a pair, but the

was not the pair he was looking for and Lange exited in fourth place for $163,003.

When play got to three-handed, the deep structure of a World Poker Tour event really kicked in as Rudolph, Dvoress and Kovalski spent roughly four hours trading blows, exchanging chips, and taking their turn as the chip leader.

Eventually, Rudolph doubled through Dvoress when Dvoress shoved pocket deuces into the pocket jacks of Rudolph. Rudolph took over as the overwhelming chip leader and Dvoress was left as the short stack. When Kovalski open-shoved with

, Dvoress made the call holding

, giving both a pair. However, Dvoress couldn’t improve through the

Shortly after Dvoress’ departure, Rudolph and Kovalski quickly agreed to a heads-up chop in which Rudolph locked up $457,442.75 and Kovalski agreed to $401,792.69 with the required $30,000 being left for the eventual winner.

While play opened up a little, Rudolph and Kovalski still battled for nearly 30 minutes and, once again, traded the chip lead back and forth. On the final hand of the tournament, Kovalski called on the button with

and Rudolph raised the big blind with

. Kovalski called and the pair saw a flop of

giving Rudolph top pair, and providing Kovalski flush and straight outs. Rudolph led out and Kovalski shipped his remaining 17 big blinds over the top. Rudolph quickly called and the

came off on the turn and when the

hit the river it was all over. Kovalski finished up as the runner-up taking home his promised $401,792.69, over $39,000 more than the posted second-place prize.

Christian Rudolph is the winner of the World Poker Tour Online Series Main Event, taking home a total of $487,442.75 plus a spot on the Mike Sexton WPT Champions Cup. 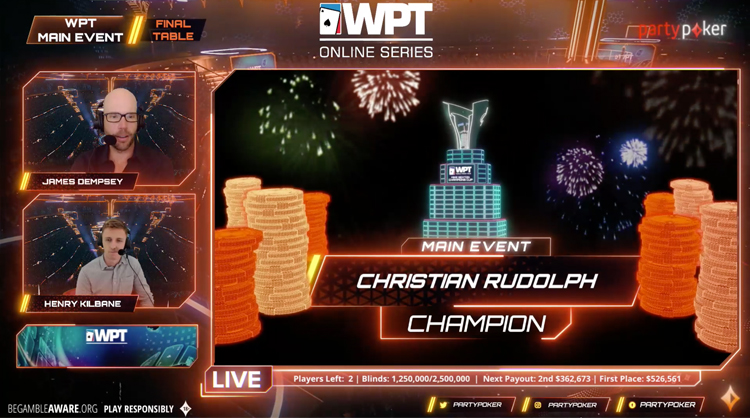