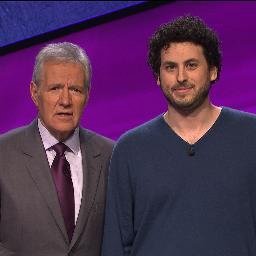 Demonstrating an impressive overall knowledge of trivia, former poker proAlex Jacob (pictured) is currently in the middle of a run on the game show “Jeopardy.” His run began on Friday, where he was introduced as a “commodities trader” from Chicago, Illinois. Poker fans may have not identified Jacob when he first appeared on the small screen, as he has shed the fabulous afro that would automatically identify him on the felt.

During the contestant interview portion of the show, host Alex Trebek touched on the fact that Jacob used to play poker for a living, but quickly moved off the subject, remarking that Jacob’s current job as a commodities trader was “just as difficult.”

After wins on Friday and Monday, Jacob buzz-sawed through the competition on Tuesday night. Along the way, he was able to entertain the audience during the interview segment after Trebek pointed out that Jacob could sing the ABCs backward (and Jacob complied on the spot). By the time Tuesday’s episode had concluded, Jacob had racked up over $22,000 to put his overall earnings at over $71,000.

While Jacob’s journey on “Jeopardy” has been entertaining, his Twitter feed has eclipsed his exploits on the show. “In the Jeopardy green room, I was introduced as the returning champion,” Jacob wrote. “One contestant asked me how many games. I said 17 #intimidation.”

Jacob has racked up over $2.6 million in tournament poker earnings, including winning the 2006 United States Poker Championship in Atlantic City. He has 24 World Series of Poker cashes and three World Poker Tour cashes that include a runner-up finish at the 2006 Foxwoods Poker Classic. However, he hasn’t cashed in an event since 2012.

Alas, it does appear that Jacob’s run on the show will be coming to an end, potentially as early as Wednesday. On Tuesday, Jacob Tweeted a special thank you to several of the contestant coordinators for the show and, when his run started last week, admitted he regretted not thanking his “loved ones” the last time on the show. In a special finishing touch, Jacob uses a photo of him and Trebek as his Twitter avatar.

To see just how long Jacob will continue his run on the show, check your local listings.