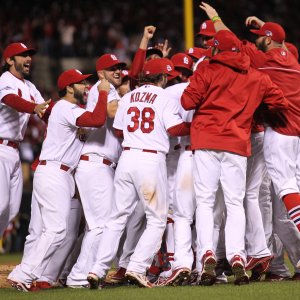 On Saturday night, DraftKingsis the place to be. There are tournaments of all sizes and buy-ins for those ready to tackle the six-game MLB slate. As of press time, both starters in the San Francisco at Colorado game are undecided, so you’ll need to be ready to call an audible once the arms are announced if you’re targeting that game. With that, let’s dig in to the offerings and see if we can spot a gem or two that brings you the big check. Sign up for DraftKings here.

As always, keeping in mind a few basic guidelines proves helpful in constructing lineups which will give you the optimal chances of a large cash. You will develop your own methods over time, but some are pretty tried and true. These include:

– Pay For Pitching: You know what you’re getting on a nightly basis from starters, and with that knowledge comes a hefty price tag on the top performers. You will want to lock up solid pitching and gamble a little more on the high-variance nature of daily hitters – lock up the arm(s) and hit the lineup research.

– When picking your hitters in a GPP, always favor a power hitter over a line drive/high average guy: DK rewards power, and will reward you for finding it.

– Stack, stack, stack: aka, go big or go home: for GPPs, we will need multiple big numbers from our hitters. When you stack, you are maximizing your odds of this, for the most productive hitters are those with teammates on base for them. When a lineup gets shut down (despite our impeccable research), you will sink with that group. You cannot win a GPP in general without a stack and that’s what we are playing this game to accomplish.

– Put the time into study lefty/righty splits. It will take the most time in your daily research, but it will be well worth it. Dig deep and find the value which is there.

Last week, we recommended rolling with the great Matt Garza in Citi Field against the Mets. The pink slip in my P5s locker will attest to the success of that move (3.1 IP, 10 ER, 10H). Do or die here. No pressure, right? I think the Mets just scored again. Without further ado, on to Saturday night!

We have six games on the Saturday night slate and as mentioned above, the SF @ Col tilt does not have a confirmed starter. You can be sure that the hitters in that game will be over-repped in GPP lineups; try to fade them and jump over a ton of the competition should that game under-produce.

In terms of your two SP, in a six-game schedule, you will need to nail them both. Arieta @ Arizona looks like a solid play that will be covered by all, but as we know, starters are very reliable at seeking their level – we are landing right there for SP1. Which brings us to a 5 star fade:

5 STAR FADE: MIKE WRIGHT, SP, BALTIMORE: Wright hits every branch on the bet against tree; an unproven commodity coming off a strong lifetime debut against an ice cold at the time Angels lineup, and now makes his first ever road start in Miami. The fact that it’s the Marlins lets us know he will be massively owned here, making him the easiest of fades. Of the options available at SP2, I’d much prefer John Lackey at Kansas City or Ian Kennedy at the Dodgers.

4 STAR FADE: STEVEN WRIGHT, SP, BOSTON: Two Wrights make a wrong on Saturday night. Sorry about that one, but when you’re named after a mediocre comedian, mediocre jokes you will get. His opponent, the Angels, will be seeing their second knuckler in three days, coming off a Thursday night game against RA Dickey. This is very bad news for a knuckleball pitcher, but very good news for:

5 STAR PLAY OF THE NIGHT: LOS ANGELES ANGELS STACK: It is rare for a lineup to get a look at two knuckleball pitchers in a three-day stretch, and timing (which is the knuckler’s main weapon) won’t be an issue in facing Steven Wright. Take a long look at the box score of Thursday’s LAA/TOR game, as it can be telling. Any Angel who hits Dickey hard is sure to be in the Saturday starting lineup, and even guys with 0-fers who are back in on Saturday will be well adjusted to the knuckler. Stack liberally and keep in mind even traditional non-power guys can and will put them over the green monster against a well-timed knuckleball.

3.5 STAR PLAY OF THE NIGHT: ST. LOUIS CARDINALS STACK: Facing the only confirmed lefty starter in KC’s Danny Duffy, the Cardinals most recent outing against a lefty starter was an 8 ER, 11 Hits in 5 IP bashing of junk-baller Jon Niese. Duffy throws heat, but has major control issues, so there should be guys on base for the patient Cards lineup. Matt Carpenter is a rare lefty with even splits, Holliday and Peralta eat up lefties and a very affordable Mark Reynolds could give you huge points. If looking five-deep, Randal Grichuk is hitting everything hard right now, and if you want one more, Kolten Wong is another rare lefty that handles same sided arms. Two Wrights make a Wo….eh, forget it.

As always, keep an eye on the weather, as you don’t want a starting pitcher getting cut short due to delays, and best of luck to everyone attacking the juicy DraftKings Saturday night DFS schedule. Sign up for DraftKings here.