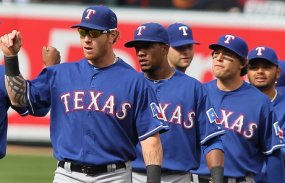 With eight games on the Saturday night docket, the action will be intense over at DraftKings, where, as always, there is an MLB tournament for your desired buy-in level no matter how high or low you want to play or how many opponents you wish to take on. Sign up for DraftKings here. US players are welcome!

For quick review, some of the guidelines we’d like to keep in mind when selecting a GPP squad are as follows:

– Pay for Pitching: Your starters are way more likely to perform to their typical level in a one game sample than your hitters are. You can get a little cute at times on the mound with your SP2, particularly in targeting a discount guy who can get strikeouts, but don’t get too crazy. True to form, we will be touting a solid SP1 and a flamethrower with a high strikeout upside this week.

– When choosing between hitters in a GPP, due to how strongly DK favors the power numbers in their tourney scoring, always favor a power hitter over a line drive/high average guy. A good high average hitter has a much lower ceiling in a daily format and you need to reach some top floors to cash big.

– Stack, stack, stack: Each player in a lineup feeds off the production, or lack thereof, of those surrounding him in the lineup. Hitting isn’t contagious, but opportunity is. In a GPP, you will have to have a number of hitters go off, so the best way to do this is by rostering four or five guys from the same lineup. As a rule, DK requires players from three separate teams on your hitting lineup, so go stack/pair/single to maximize upside.

– Pay serious attention to the lefty/righty splits; this is crucial. Avoid stacking lineups with multiple lefties if possible, as those teams are easy prey for the lefty relief specialist. You will either lose your guy to a pinch hitter or be at a huge disadvantage in the lefty/lefty matchup. Find lineups facing a low strikeout pitcher, preferably one who has a weak ratio of GB/FB. This aspect takes the longest to research, but yields the highest value rewards.

Last week, we touted a couple of starting pitcher fades and a couple of lineups we liked with mixed results. Unfortunately, that was a vast improvement on the previous week’s duds, so we are trending up. My executive bathroom key card still works today, so I’m riding positive momentum this weekend.

Now let’s get to Saturday Night! This Saturday, we have an interesting eight-game night slate. Here’s who we’re targeting:

Recommended SP#1:Michael Wacha, home vs Dodgers. He is clearly the best SP going on the card and has a great matchup against Frias, which should lead to a win. The Dodgers are the top scoring team at home this season and are the second lowest scoring team in the majors on the road. Nadia Comaneci couldn’t split that wide.

Recommended SP#2: Yordano Ventura at Chicago Cubs. This is the perfect storm setup we want when rolling out our SP2: a guy with a 98 mph fastball facing a lineup prone to the strikeout. The Cubs youngsters are studs, but they swing and miss more the average PocketFives executive at Singles Night.

Stack/Attack#1: Seattle at home vs Cleveland. Grunge may have been an 18-month fad, but get out your plaid shirt because it’s back for one more night. The Indians are rolling out Shaun Marcum – he of the 84 mph fastball, the 0.94 GB/FB ratio, and the FIP of 6.76. Does it get any better? Why yes, he also has a beyond unsustainable .197 BABIP. You’ll reach Nirvana when you jam as many of the 1-6 hitters on Seattle into your lineup, as Shaun Marcum is no Pearl.

Stack/Attack#2: Texasat home vs Boston. Fill in your remaining lineup pieces with Rangers hitters lucky enough to have Wade Miley to dig into. He is awful, not Shaun Marcum-awful perhaps, but the next worst thing. The Rangers bats outside of Fielder will all be cheap enough to get a lot for a little. I was going for something that rhymed with Book Depository here, but the only option is not family safe, and I can’t afford to lose another sponsor at this point.

Keep an eye on the weather to avoid losing a starter to disruptions, and as always, best of luck to all those playing the DraftKings tourneys this weekend. Sign up for DraftKings here. US players are welcome!